… a couple of days ago, I featured a post with two Authors… today we go even better… two Authoresses! my dear friends , Miriam Drori and Emma Rose Millar (she’s the one holding the book)… and some launch news to impart… get ready to receive the impartation… 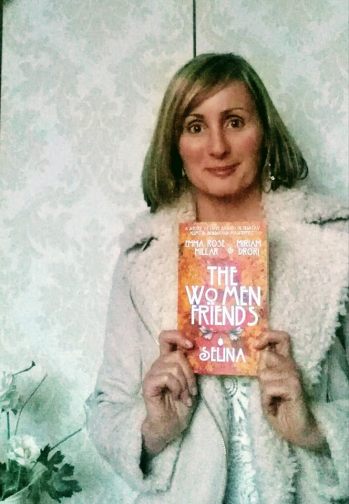 How do you like to find out about a book? Do you

All of those choices are available for The Women Friends: Selina, due out on Thursday, 1st December.

Who is the young woman with the haunting gaze in Gustav Klimt’s 1917 masterpiece, The Women Friends?

Selina Brunner is running from the demons of her past, cut off from her family in a sleepy Tyrolean village, and lost in the soulless city of Vienna, where everything – even one’s very existence – is a lie.

When, amidst growing fear of sinister developments in Vienna, an exotic stranger comes to town, Selina finds old passions reignited and her whole world turned upside down.

The Women Friends: Selina is the first in a series of fictional tales about the women who inspired this great artist. 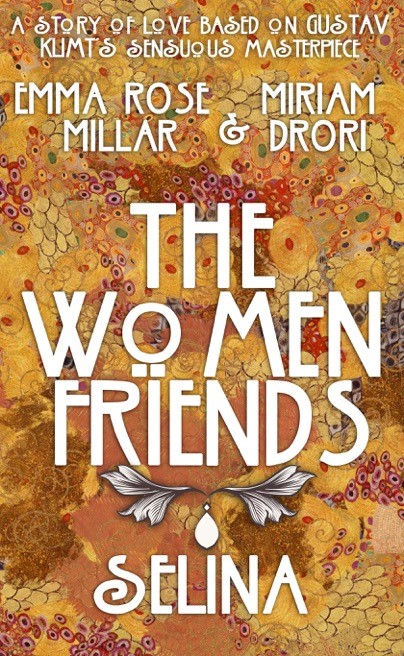 Listen to the beginning of The Women Friends: Selina here.

Emma Rose Millar was born in Birmingham – a child of the seventies. She is a single mum and lives with her young son who keeps her very busy and very happy. Emma left school at 16 and later studied for an Open University degree in Humanities with English Literature. She has had a variety of jobs including chocolatier, laboratory technician and editorial assistant for a magazine, but now works part-time as an interpreter.

Emma writes historical fiction and children’s picture books, winning the Legend category of the Chaucer Awards with Five Guns Blazing in 2014. She is currently working on her third novel, Jezebel, a dark tale of obsession and opium addiction set in the roaring twenties.

Emma is an avid fan of live music and live comedy and enjoys skating, swimming and yoga.

Miriam Drori was born and raised in London, but has lived most of her life in Jerusalem, where she married and gave birth to three now grown-up children. Following careers in computer programming and technical writing, Miriam turned her attention to creative writing. Her first published novel, Neither Here Nor There, is a romance set in Jerusalem, a story of two people drawn to each other despite their very different backgrounds.

Miriam began writing in order to raise awareness of social anxiety and never fails to mention this common but little-known disorder when the opportunity arises.

You can find out more about Miriam and connect with her on her website/blog: https://miriamdrori.com/ or follow her author page on Amazon: http://Author.to/MiriamDroriAtAmazon

We’ve written several articles about the setting of The Women Friends: Selina. Here’s a list of them.

You are hereby invited to the launch party for The Women Friends: Selina on Thursday, 1st December at 3 pm (UTC+1). Just pop over here and click on Going. On the day, there will be a competition to win a beautiful prize and lots more.

Wherever you are in the world, whether you want the ebook or the paperback, this is the Amazon link to buy The Women Friends: Selina. You don’t have to wait for the day. It’s available for pre-order now.

Seumas, thank you so much for hosting us on your delightful, though occasionally baffling, blog. I haven’t lost hope that we will, one day, meet in person.

…another terrific book launch from the Crooked Cat Publishing stable a week ago features the splendid novel, Five Guns Blazing, co-authored by Emma Rose Millar and Kevin Allen… this post’ll put yeez in the mood… (and don’t even think about stealing a loaf of bread!)…

‘Oh don’t hang me, sir, I beg of you!’ The court seemed suddenly excited by her outburst. It was all entertainment to them; the law after all is only theatre; it did not matter much if one was hanged or not, it was all part of the drama. ‘I only did it for my daughter, who was sick and in need of medicine. My husband’s dead, sir, what is a woman to do?’ I felt a blush burning from my collarbone to my temples and someone laughed and shouted, ‘She is a liar, sir! The girl is the bastard child of two thieves!’ (Five Guns Blazing, Emma Rose Millar and Kevin Allen). 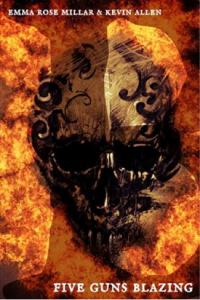 In early eighteenth century England there was no such thing as a petty crime. Records from the Old Bailey show that the death penalty could be handed down to anyone who dared to steal so much as a handkerchief. However, there was an increasing backlash against this bloody code, with many juries returning partial verdicts or reducing the offence to one of a less serious nature, thus allowing the judge to hand down a more lenient sentence.

These alternative punishments included things like pillory, the typical penalty for crimes like attempted sodomy, seditious words, extortion and fraud. The convicted criminal would be placed on a platform in the stews of London with his head and hands through holes in a wooden structure, where he would be pelted by the crowd with excrement, rotten fruit, eggs, animal guts and stones, sometimes causing death. If the charge was seditious words, crowds would sometimes cheer and throw flowers at the culprit. The practice wasn’t abolished until 1837 after constables increasingly formed a ring around the criminal in order to protect them. 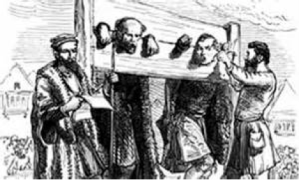 Branding was a typical punishment meted out to those found guilty of manslaughter of theft. Between 1699 and 1707, thieves were branded on the cheek. However, this made them unemployable and after 1707, the branding iron was applied to the thumb. This was done in front of an audience in the court room at the end of proceedings. It seems some criminals managed to bribe the executioner to apply a branding iron.

There were other punishments such as whippings, fines and imprisonment for other minor offences, but for some, the penalties were very harsh indeed:

‘Redemption’ was tossed around like a matchbox on the crashing Atlantic waves as the storm lashed against the ship, lifting its bow from the raging ocean while the captain fought to bring her under control. We slid from one end of the hold to the other. My mother’s skin where her collar chafed against her neck became bright and horrible in shades of purple and crimson and black as it peeled back and rubbed away, but while others screamed now at every movement of the ship, my mother stared icily into the gloom, as if she was no longer there at all. It was only then, as I imagined land fading into the distance, and the vast expanse of sea that it hit me: my old life was gone forever. (Five Guns Blazing)

Most surviving accounts of transported convicts focus on notorious criminals or scandalous circumstances.  However, the overwhelming majority of those transported to the colonies were ordinary men and women, convicted of petty offences.  After being handed down their sentences they promptly disappeared from the history books.

Conditions on board the ships were horrendous; many of the convicts died during the voyages of cholera and typhoid.  Those that survived were severely weakened by scurvy, dysentery and fever.  Convicts went on board shackled and in chains.  A hatch was opened and they went below deck, where they would spend the rest of the voyage.  Usually the chains were removed in the prison deck but sometimes not.  They were allowed on deck at intervals for fresh air and exercise.

If they survived the voyage, convicts were sold to plantation owners and worked alongside indentured servants and African slaves.  The status of convicts varied depending on the plantation; some were treated in line with indentured servants while others were subjected to the same forms of degradation as slaves, the big difference being that the convicts were only sold for the terms of their criminal sentences.

Anyone convicted of piracy or treason was likely to be hung. Performed in public, the gruesome display was meant to be a deterrent for all those who were tempted into a life of crime. However, for many, executions became a spectacle and created carnival-like excitement. Even the route from Newgate was lined with girls blowing kisses, crowds cheering or jeering and some throwing food or excrement.  Stall-holders sold refreshments and people hung out of their windows in order to get a look at the condemned men and women who were on their way to their deaths. 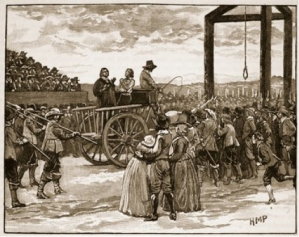 The village of Tyburn, just outside London probably remains the place best known for the implementation of the death penalty in England. However, there were actually only eight hanging days every year. The time between executions allowed new stocks of condemned men and women to build up in gaol so that the events would become even more spectacular, involving a number criminals.

Once at Tyburn, the condemned criminals mounted another, wider cart and cords were passed around their necks, which were tied to the scaffold. The chaplain would pray with them and relatives were allowed to say farewell. Then the executioner would cover the prisoners’ faces and lash the horses so that the cart would be pulled away, leaving them to hang from the gallows. Often, friends and relatives would pull at their legs so that they would die quicker and not suffer.

After hanging, murderers’ bodies were sometimes covered with tallow and fatty substances, and dressed in a tarred shirt fastened down with iron bands. Their bodies were hung with chains to the gibbet, which was erected on, or as near as possible to the spot where the crime was committed. It was left there to rot, hence the expression to ‘hang in chains’.

Five Guns Blazing is an epic tale of piracy, slavery and treason, now available on Amazon:

…there now, Lads and Lassies of Blog Land… avast, and aaaagghhhrrr, landlubbers… spill yer doubloons and download a copy now… or else it’s off to Van Damien’s Land with yeez …

…thanks for sharing, m’Lady, Emma…

…mega-thanks to the LUVLY Emma Rose Millar for putting up with me recently in an interview with her… here’s how it went :):